Why Prahok is so important for Khmer food

When it comes to Khmer food, many people don’t know much about it. It’s as hidden from the international cuisine as the temples of Angkor Wat were from the world for centuries. Khmer food is both unique (like prahok)  and a blend of spices and recipes from other countries and cultures at the same time. It has its own subtle flavors, so it remind many of Thai dishes. But it lacks the extensive use of chili, what is often highly appreciated by western travelers when they want to eat food in Cambodia. One main reason is, that the Khmer cuisine has it roots centuries ago, long before chillies actually came to this part of the world. Thai food is actually a derivate from Indian and Khmer food.

Cambodia was always a poor country, although rich in culture. People used herbs and vegetables more than meat and fish. Fat is less used than in Thailand and Laos, and more similar to Vietnamese food. What makes the Khmer food so special, is a paste that stinks and is yummy all together: Prahok. You will find it in soups as well as in fried dishes, and some eat it just from the jar with some fresh vegetables. Whenever  you eat with locals, Prahok will be on the table.

The history and importance of Prahok

Prahok contains fermented fish, and traditional Khmer use a small fish called Trey Riel to produce it. The importance of prahok and the fish is very much alive in the name of the Cambodian currency: Riel. Prahok was once important in the everyday life of Cambodians, that people from the inner land travel to places to buy Riel-Fish at the markets. It became kind of a currency and was sold for certain amounts of rice. The fish itself is called the Siamese mud carp in English.

It is native to South-East-Asia and usually found in the Mekong and the Chao Praya River in Thailand. The fish lives in freshwater and you can see it in the flooded areas in the wet season, often in rice fields and the canals dividing them. It migrates form Cambodia upstream to Laos, Vietnam and Thailand, and is also found in the Tonle Sap river and the Tonle Sap lake south of Siem Reap. When the Riel fish is not available, people often user other species as well. 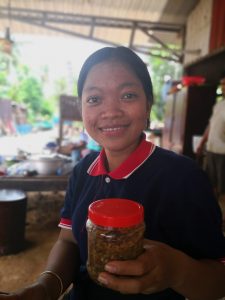 In former times, Prahok like other food in Cambodia was made in the villages by all the people at hand, mostly women who stayed at home. First step: remove the head and the guts as well as the scales of the fish. Then fill  the fish bodies  into small flat buckets and let the kids crush them with their feet – a bit the same way grapes are crushed in a winery. Women take out those fishes who look bad and sick, so only the best quality is left. After a while, the fish becomes a pulp and needs to be dried first. You can see (and smell) it some times  front of locals houses. The fish dries in the sun for one day. Then it will salted and put in jars made from glas or plastic.  Like a good whiskey, Prahok gets better over  the years, although four years is a maximum.

Since the fermented paste has a distinctive smell, foreigners named it the Cambodian cheese, although it is not as strong as the Lao Padek, a sauce made from fermented fish. The Khmer paste can be used as it is, but there are also many varieties. Some Khmer will add tamarind and palm sugar, others use chili to spice it up a bit. In Siem Reap Prahok contains even small read ants. Basically every village and family has their own secret recipe. You can try a spicy and yet delicious version at our host Sarath in Siem Reap.

As in many cultures, fermented food like prahok serves a purpose. When they are no fridges and times when not much food was available, prahok delivers important protein and amino-acids. Fermenting is a great way way to store food, from beer to the Swedish Surströmming.

The tradition of food in Cambodia

Prahok is probably the most unique and important ingredient in the Khmer cuisine. Most dishes you stir fry or boil as a soup, while meat best grill over an open fire. Most Khmer people use rice as a staple food, and then cooked one or two dishes along with it. The classic Cambodian meal contains three dishes, and that’s why all of our hosts are serving three dishes to our guests in Cambodia – plus additional fruits as a dessert 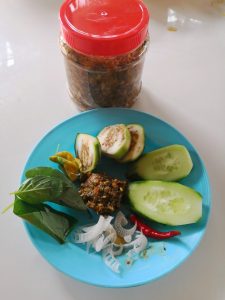 Fish was and is the main source of protein and you will find it in most dishes. Only chicken is as popular since it can be raised on the premises and reproduce fast. But climate change, logging in the forrest and a growing population and demand having an effect on supply and prices. Prices went up from 1000 to 3500 Riel per Kilo of fish in just two years. Also, the fishes are getting smaller and smaller, due to overfishing in the Cambodian rivers and the Tonle sap lake. Additionally, the dams build in China regulate now the amount of water that comes downstream, with huge impacts on the lower Mekong region. Higher water temperatures and less rainfall have an impact too.

What comes handy is that some people change to vegetarian diet. Cambodia produces an excellent tofu, sold at markets and supermarkets. The tofu is firm and people fry it or even used for desserts. Some of our hosts also offer a vegetarian option now for our guests. Also, since an outbreak of  Swine-flu outbreak in Vietnam, many people avoid pork meat for now.

But the Khmer cuisine offers more than just meat and fish. There is Kreung, a paste  from different spices, mainly galangal, lemongrass, ginger, garlic and turmeric. You mix it with vegetables and then stir fry or cook it. Use it with or without coconut milk, or just combine with roasted rice powder and make Kor Ko, one of the most famous Cambodian dishes.

There are attempts to create a vegetarian version of prahok, but for now they are not really convincing, Best results are for now green jackfruits and mushrooms sauce.