title, keyword
Home » What is the Cambodian cake Orn Som?

What is the Cambodian cake Orn Som?

Every year during the Pchum Ben holidays members of the family will get up early in the morning and start making Orn Som. It is popular Khmer snack, usually made for special occasions, but also found at local markets. It contains sticky rice, yellow beans and pork, wrapped in a banana leaf.

How to make Num Orn Som?

If you want to make it yourself, you just need a few ingredients. The most difficult to get might be a banana leaf, but it is an important part of the dish. First, you have to soak sticky rice in water over night. Then in the morning you wash the stick rice and let it drain, then mix it with coconut milk, some sugar and salt. Have a bowl with soaked and boiled mung beans and a bowl with slices of pork belly ready. The pork belly can be salted and you may want to add some garlic as well to make Orn Som.

You will now place a rectangle banana leaf on your kitchen table (you can also put aluminium foil under it). Then spread sticky rice like you would do it for a sushi roll. Press it slightly down, so it’s a flat surface. Next comes a layer of mung beans, flat as well and not extending over the stick rice. Now place a slice of pork belly over it. Cover it again with some mung beans and sticky rice. 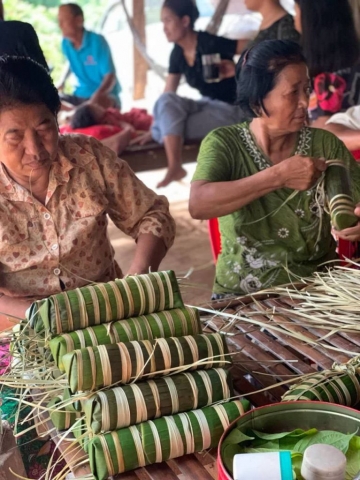 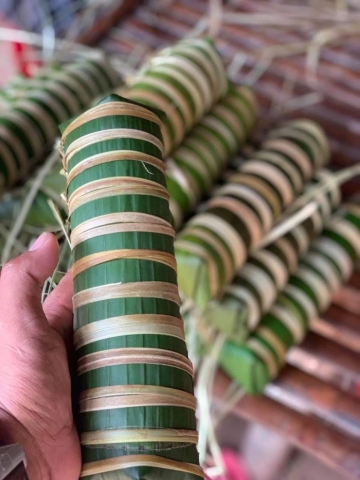 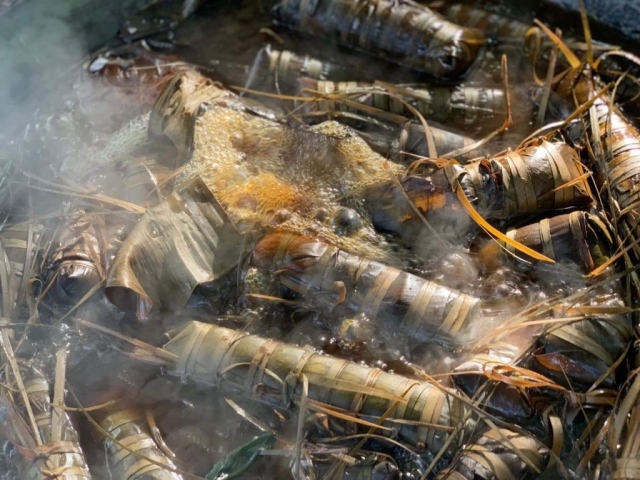 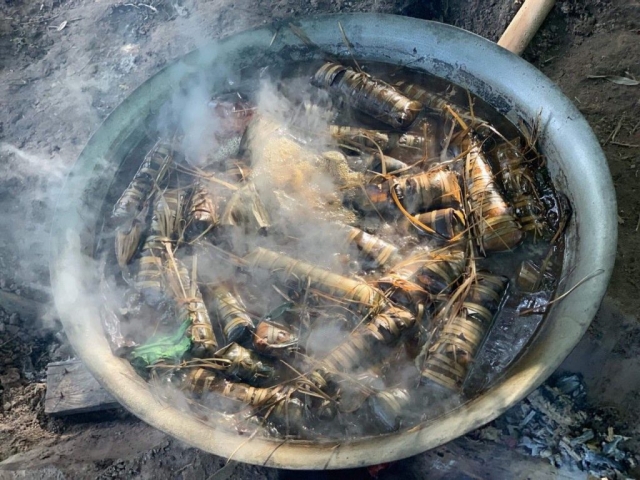 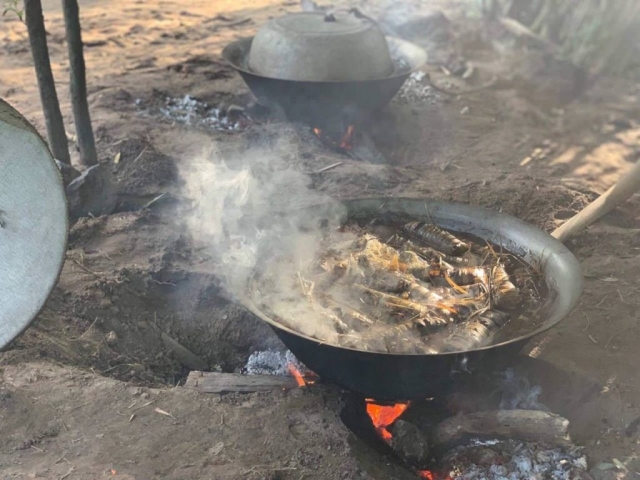 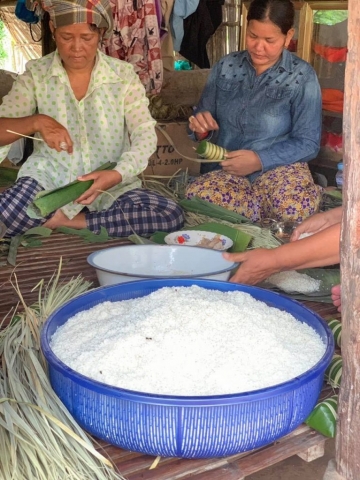 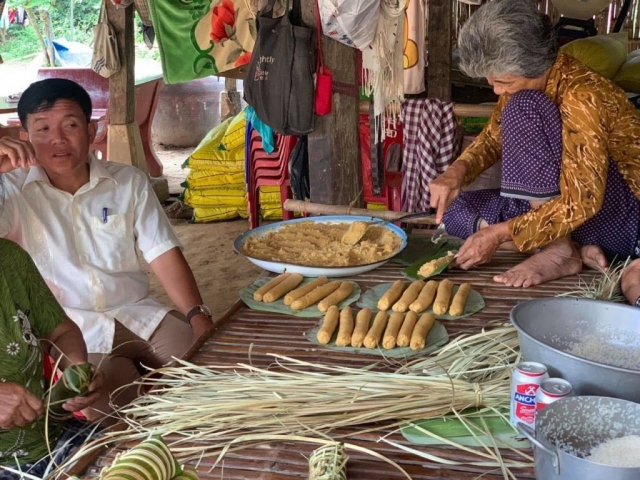 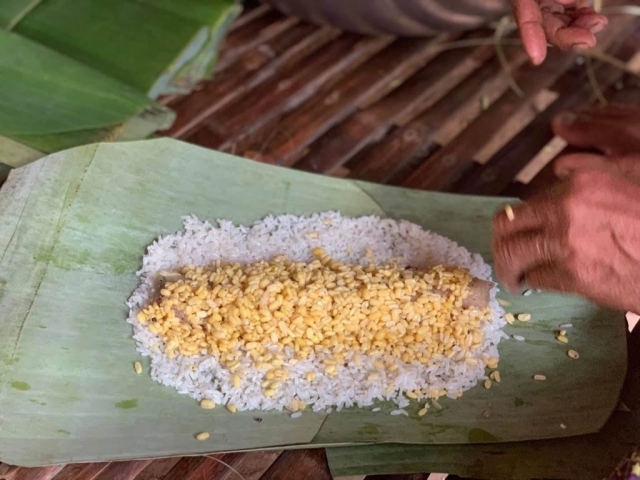 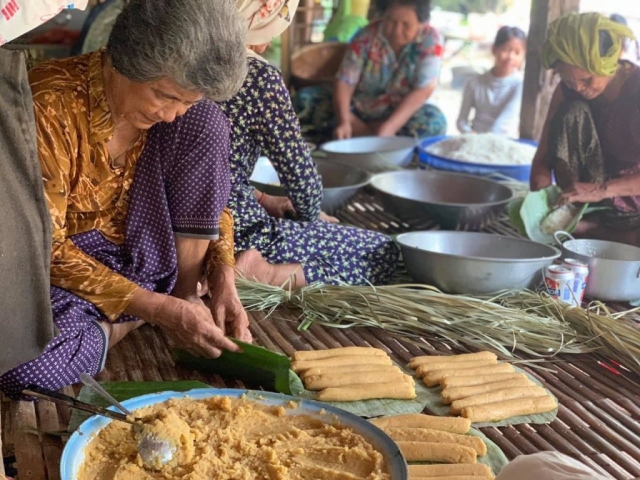 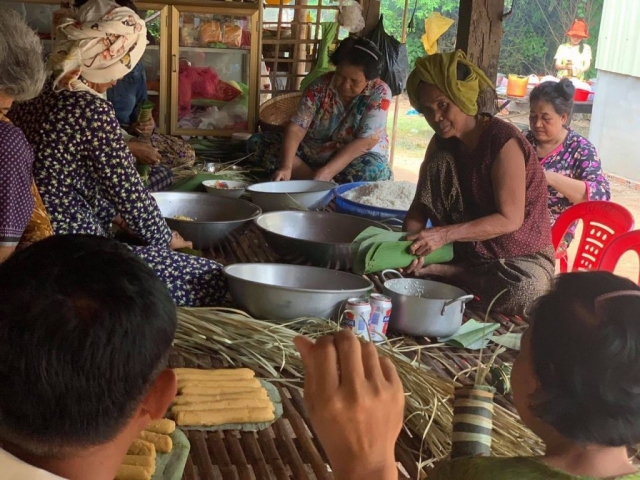 Make a roll and secure with strings

Now comes the tricky part: You have to make a roll out of it. If you use aluminium foil, then just hold both end of banana leaf and foil together, fold it twice and roll over. The traditional way of Orn Som however is to roll and fold carefully, and then secure it with strings. Nowadays many people use cheap plastic, but in the Cambodian villages Khmer families will still use strings made from natural material like banana leafs or water hyacinth. Once the rolls are done, you will boil them. If you do it at home it take about 5 hours to cook, in simmering water. Cambodians will use huge pots and heat the water over open fire.

For a holiday, Khmer will put the Orn Som into a basket and bring it together with other foods to the pagodas. Here it is either offered to the monks and they will have it as lunch, or placed on a certain table, where people then pick it and eat together. You can replace the pork belly with beef or even chicken, the latter isn’t as juicy as it should be. There are also sweet versions, where the meat is replaced with bananas and shredded coconut.