title, keyword
Home » The Khmer dessert from the tree

The Khmer dessert from the tree

Num pleae-ay, fake fruit cake, (នំផ្លែអាយ) is a sweet and yummy Khmer dessert consisting of a piece of palm sugar, wrapped in a layer of sticky rice flour. Before eating, you have to top it up with shredded coconut flesh to make it even more tasty. Desserts are an important part of Khmer food, but not always eaten after the meal. Instead Khmer citizens buy it as a snack. 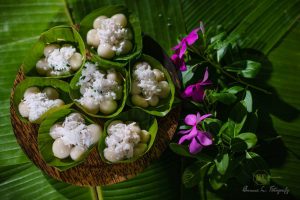 Cambodian desserts are sweet and juicy 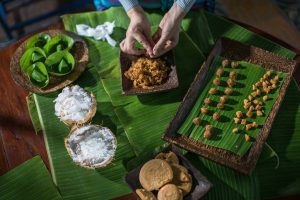 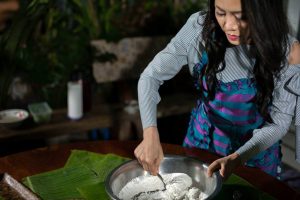 In ancient times, Khmer called this dessert នំបំពួនស្ករ [num bɑmpuən skɑɑ, dripping cake]/ នំបង្កប់ស្ករ [num bongkob skaa, embedded cake] or នំខំស្ក [num kham skaa]. They difference originate from translation into Khmer language, but also local varieties. Originally, people made it from sticky rice flour, rolled into a flat pancake and then put palm sugar inside, made a ball and then boiled it. Finally, they placed the Khmer dessert in a bamboo knot and topped on a slice of banana peel to sell in the village market. Even today you can see sellers with bicycles offering it in the village or sell it mainly in the morning at the market.

But sometimes, because of the thin crust of the cake, the juice of the palm sugar  leaks out, and then cake has no taste. So, house-wifes changed the cooking technique and stopped filling the palm sugar inside. They cooked only rice flour, then grilled it and placed it in the banana leave. When you want to eat it, you have to dip the Cambodian dessert in honey or palm sugar liquid and sprinkle with chopped coconut flakes. Recently, people started cooking this cake by putting the piece of palm sugar inside again, but it does not place in a bamboo knot like before. 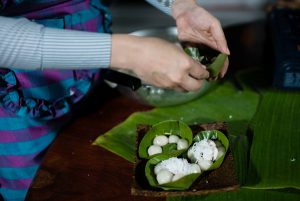 Because the cake had a ball shape and something like a seed inside,  locals called it for a long time a tree fruit cake, even if it wasn’t a actual fruit. But the name still remains as a fake fruit cake, នំផ្លែអាយ. or Num plea-ay. 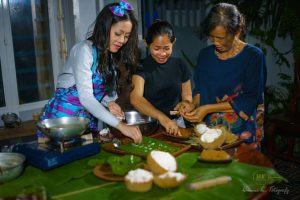 The tradition of making it is fading. The recipes and manuals are orally traded most from mother to daughter. But since many young women are less interested in cooking (and young men never actually were), those traditions are on the risk of extinction. At DINE WITH THE LOCALS our host preserving those traditions. Ms Phanny in Phnom Penh is a new host, who always made the fruit cake for her family. Now she makes the Khmer dessert for special occasions, but when you are lucky, she will tell you how to make this Khmer desserts as well.