Siem Reap is under construction

The Covid 19 pandemic has turned Siem Reap into a ghost town. On Pub Street, almost all bars and restaurants are closed, and the road to the airport is lined with hotels with a “For Sale” or “For Rent” sign on the drawn bars at the entrance gates. The number of foreign tourists has dropped by over 90 percent. Small stores that once sold cold coconuts and fried bananas at Angkor Wat now offer face masks.

At the same time, a gigantic construction project has begun. In 2020, the central government in Phnom Penh had decided to renovate 38 roads in Siem Reap. A budget of $150 million has been set aside for this – most of the money comes from the sale of state-owned land.

For several months now, excavators have replaced the tourist buses, construction workers with helmets and high-visibility vests stand where Chinese visitor groups once ran after their guides. Sivutha Road in the heart of Siem Reap is also being renovated, as is Airport Road. New sewage pipes are being laid in Pub Street. Where once Angelina Jolie drank a cocktail, the shutters are now down. The Red Piano has opened a second branch on Sok San Road, which is already completed. 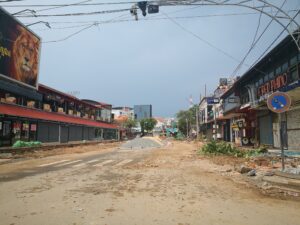 The road between Pub street and Sivutha Road in Siem Reap 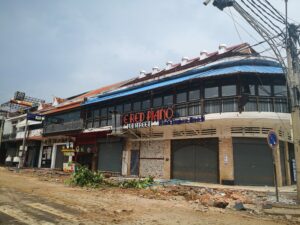 The Red Piano in Siem Reaps Pub Street is closed

There were protests here and there because some houses were built into the street or stalls took up a few meters of public space. But the otherwise so good relations did not help, some hotels had to rebuild their driveways or even lost their reception.
The new streets will not only get a new surface. The project includes laying most of the cables in the ground. At the same time, the roads will be widened to their original width, and many will even get a sidewalk. 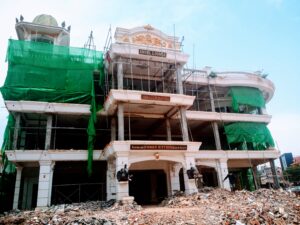 The once famous Elephant Hotel gets an overhaul

Currently, around June 2021, most water and sewage pipes have been laid, and the trenches and holes have been filled in again. At Jajavarman Hospital, the first sections are already finished. Likewise, the Airport Road is already getting its asphalt in some areas.

A new city will emerge

When tourists return to Siem Reap in 2022, they will certainly see a different picture than before. In a video, City Hall painted the picture of magnificent boulevards and boats on the Siem Reap River. Even if some doubt, in any case, Siem Reap will look different.

But tourists are still a long way off. The numbers with new infections are nationwide in the middle three-digit range, in Siem Reap between 20 and 30 daily. There is a ban on alcohol sales; also a ban on gatherings, and a curfew between 10 pm and 4 am. Vaccination is currently underway in the main city of Phnom Penh and the worst affected provinces. The rate is 20 percent, and most of the vaccines come from China, SinoPham, and SinoVac. Cambodia’s Prime Minister Hun Sen has announced plans to have all citizens vaccinated by 2022.