Not only in business and food, also in tradition you can see how many families in Cambodia have Chinese roots. There will be celebrations for Chinese New year, but also today, August 15th., is an important day. Families in Cambodia get up early morning to prepare all the offerings and make specials version of food in their homes. Its time for the Hungry ghost festival or Sen Kbal tek in Cambodia 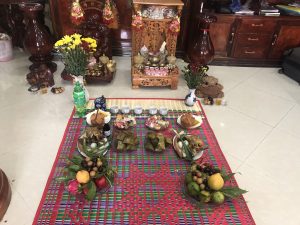 Offerings from the ghosts in a Cambodian home

One  legends says that a student of Buddha students, Maudgalyayana, is kind of the founder. of the festival. He achieved the state of abhijñā and used his new found powers to search for his deceased parents. The story goes that he saw his mother in the realm of the hungry ghosts. So he went down to hell, took a bowl, filled it with some food and gave it to the ghosts and his mother.

But before they could get it in their mouth, the food turned into sizzling hot coal bricks. The student then asked the Buddha for help. He told him, that the mother’s sins were quite significant, and it needs 1000 monks to make offerings. A good day for that would be the 15th of the 7th month in the lunar calendar. And to be on the safe site, he added, prepare as much as you can, make it look nice and don’t forget fruits, incense sticks and candles.

Day off for the hungry ghost festival in Cambodia

And of course the Buddha was right. The 1000 monks showed up, took the offerings and created enough power to free the mother from her sufferings. So to prevent something happening to your ancestors, families get up early and start cooking all the food. They present everything at the front door of a house or in the lobby. Khmer-Chinese families also show their wealth by big offerings, while at the same time pleasing the ghosts. In some Cambodian families all members come together for a – sometimes vegetarian – meal. Some seats are reserved for the deceased and remain empty, but will served with food. 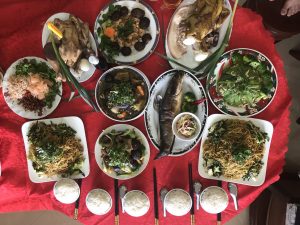 What happens to the offerings? The family will either divide it with its members or give food to poor people in the neigborhood or in the village. The 1000 monks will not show up anymore, and Chinese family rarely invite them. Another reason: since we started the rainy season, monks will likely stay in the pagoda, because it is too hard for them to walk outside for the alms giving. So Khmers go to the temples and feed the monks, until after Pchum Ben Day.

It is common that members of the family take a day off from work, but it’s deducted from annual leave since it’s not a public holiday in Cambodia. Some businesses will also be closed at least in the morning for the celebrations. You will see kind of the same offerings during the Pchum Ben festival in Cambodia, which is in 2019 at September 27th and counts as a public holiday. Many workers will leave Phnom Penh and head to their hometowns for this event.

A special experience for travelers

From next year on we will offer a special experience for the Chinese hungry ghost festival. But for this years Cambodian version of the festival, we can offer you a ver special and spiritual experience. You will help a family wit the preparations for the festival, then go with the to the pagoda and watch the praying (or pray with the family, up to you). After the prayers and religious ceremony you will go back to the house and have a great meal all together. 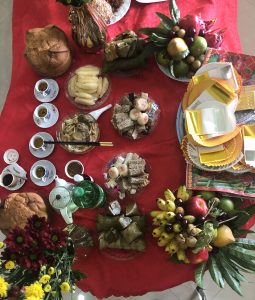 If you want to celebrate Pchum Ben with our hosts, please let us know in advance. We can check who is available.

Food is prepared in the morning