title, keyword
Home » How to make Num Pom (Khmer waffles) and other sweets

How to make Num Pom (Khmer waffles) and other sweets

Whether you’re in a market or just walking along a busy street, there are street stalls selling small desserts everywhere. Many sellers open already in the morning, from 7 o’clock and until 9 o’clock some are already sold out. There are many different types of these fried desserts and treats. We want to introduce three of them here, most importantly, Num Pom, the Khmer waffles

Our host in Siem Reap, Ms. Laum, sells homemade waffles in Siem Reap in the morning. In Khmer they are called Num Pom, and unlike European waffles they are not round but rectangular.

How to make Num Pom 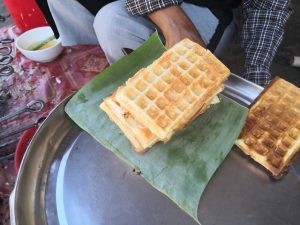 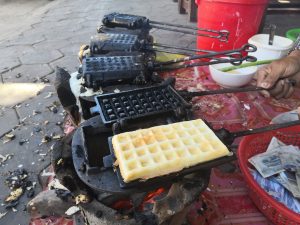 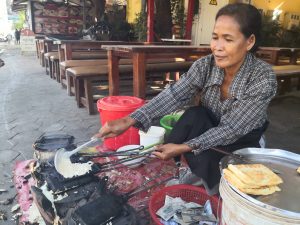 The dough is made from rice flour, eggs, palm sugar, salt, coconut cream and coconut meat. It is stirred like a regular waffle dough for about 5 minutes. The waffles are available in different quality. The cheap waffles are made with the thinner coconut milk and just a few coconut flakes. But Frau Laum buys the thicker coconut cream and fresh and coarsely grated meat.

With a ladle, the dough is then placed in the waffle irons that lie over a charcoal fire in a traditional Cambodian ground grill. The fire heats the irons very hard, so it does not take long for some crunchy waffles to finish. Traditionally they are served on a banana leaf. A good waffle costs 1000 Riel, about 25 cents. 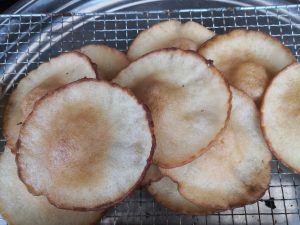 Fried in the fat dough slices, which are called in Khmer Num chak chon. They consist of rice flour, half of which consists of glutinous rice flour, palm sugar and normal sugar, coconut milk and eggs. If you eat with locals, there is a good chance they offer you them during the day. Here is the exact recipe:

How to make Num chak chon

First mix flour, salt and sugar, then stir it. Add a beaten and stirred egg and gently add the coconut milk. Gradually add half of the water. In the next step, the palm sugar is stirred gently until it has dissolved, about 10-15 minutes long. Now you add the rest of the water. The dough then has to rest for about 4-5 hoursm thats is different from Nom Pom.. Then small round pancakes are baked from it, which must be slightly brown at the edge.

Num Hing got the funny name because it looks like a bloated bullfrog. It is especially in the morning for coffee eaten and is often sold out after an hour. To do it, you have to fry it in oil, preferably in a big wok. It tastes best if you still garnish it with sesame seeds.Other than Nom Pom you will use yeast here. 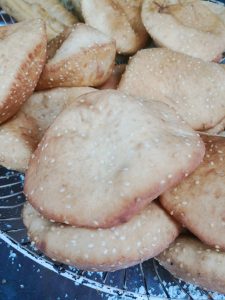 How to make Bullfrog bread

Mix all ingredients at room temperature and knead them into a dough. If this is supple enough, you have to let it go covered for one hour in a not too cool place. Then you shape a long roll on which small slices about 2 cm thick are cut off. Put it on a plate and let it rest for another 15 minutes. Then you roll the small dough pieces flat and put them immediately in the hot fat. It is best to roll only one piece of dough at a time. It has to float in fat, like in a deep fryer. When completely bloated, remove and drain. After a short cool, they can eat the donuts.

If you like to make the Nom Pom waffles yourself, book lunch or dinner with Ms. Laum in Siem Reap. You will additionally learn how to make fish amok and other Khmer dishes and have a great meal with our host. It will be a unforgettable memory and a truly authentic experience.

This website uses cookies to improve your experience while you navigate through the website. Out of these, the cookies that are categorized as necessary are stored on your browser as they are essential for the working of basic functionalities of the website. We also use third-party cookies that help us analyze and understand how you use this website. These cookies will be stored in your browser only with your consent. You also have the option to opt-out of these cookies. But opting out of some of these cookies may affect your browsing experience.
Necessary Always Enabled

Any cookies that may not be particularly necessary for the website to function and is used specifically to collect user personal data via analytics, ads, other embedded contents are termed as non-necessary cookies. It is mandatory to procure user consent prior to running these cookies on your website.