We will soon become famous! Recently we had a film-team from Germany visiting our host Sarat in Siem Reap. For now we cannot tell much more about what exactly they were filming for (but will do once it’s broadcasted). But it was an interesting experience, in particular the crocodile meat in Siem Reap. 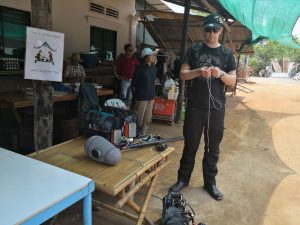 We had a filmteam visiting us in Siem Reap. Part of our offer was to try crocodile..

For Sarat it was the first time to be on camera. She also had to speak English, what was not a problem at all. Thomas then translated it to German. It took the team around 3 hours in total. They found it interesting to see the way of preparing Khmer food. The camera closed up to the mortar with the fresh spice paste , but also to the pan. There was yummy fish sizzling in oil before then mixed with spices. 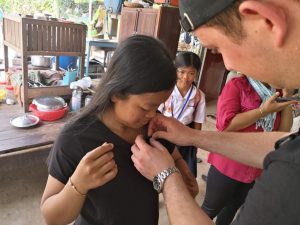 Sarat gets a microphone on her shirt – first time on camera!

Another interesting part was to see the original wooden house of a Khmer family. A visit to a Khmer home is always surprising and impressive to guests from western countries. The wooden floor and walls makes it cool even in hot days. Under the house is then some even cooler place. 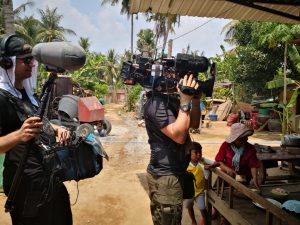 The team was interested in the daily life of a Khmer family.

The mushroom farm is also an interesting experience too many. Mushrooms in Europa grow usually in dark, moisture places like cellars and bars. Here in Cambodia it’s a hut with a roof and protecting nets on the side. 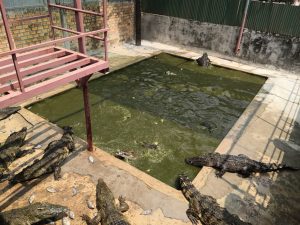 They will not become crocodile meat in Siem Reap

Last but not least the highlight: we usually don’t advertise that Sarat’s family also owns some crocodiles. And it was lucky day, they got fed with a lot of fish. The crocodiles are between 8 and 10 years old, and the lay eggs once a year. The family then sells the fertilized eggs to breeders. Sarat cooks then yummy omelette with the unfertilized eggs. And at the end, Sarat had some delicious pan fried spicy crocodile meat to taste – but bought from another farm.

This website uses cookies to improve your experience while you navigate through the website. Out of these, the cookies that are categorized as necessary are stored on your browser as they are essential for the working of basic functionalities of the website. We also use third-party cookies that help us analyze and understand how you use this website. These cookies will be stored in your browser only with your consent. You also have the option to opt-out of these cookies. But opting out of some of these cookies may affect your browsing experience.
Necessary Always Enabled

Any cookies that may not be particularly necessary for the website to function and is used specifically to collect user personal data via analytics, ads, other embedded contents are termed as non-necessary cookies. It is mandatory to procure user consent prior to running these cookies on your website.