When we first met Ms. Vannarith in her house in Siem Reap, we went straight to her kitchen in the back of the small worden house to see how she makes her famous fish balls. It’s located in the outskirts of the Angkor forrest, a small path leads to the plot of land covered by big trees. The ancient ruins of Angkor Wat are only a few hundred meters away.

The concept of a kitchen differs from western ideas, in Asia it is more an area rather than a room. Cooking food in Cambodia outside has many advantages, the biggest is that the smoke and smell stays outside. Also, being outside while cooking in Cambodia gives you a much better experience – and less sweating. 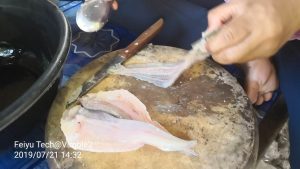 Shaving fish meat from the skin

Have a seat, please

So it wasn‘t a big surprise when we arrived and saw Vannarith and her mother sitting on a low table. Whenever you eat with locals, expect this kind of setup. This kind of furniture is common in Cambodia, and has many purposes. People sit and chat in the shade, use it to have a nap or sit there and prepare food. Tradition commands an open house in a village, where everyone can come by and have a chat and a snack.

How to make fishballs

Vannarith bought some fish at the local market. Mostly the fish comes from the nearby Tonle sap lake, one of the biggest lakes in the world. It‘s a vital reservoir for Cambodia, for fresh water but also for fishing. In recent years the water levels dropped, and usual the flooded areas included the floating villages in Siem rap were left dry for many month. Nowadays the price for fish has increased to 10 USD for a Kilogramm of better quality. And yet, the fishes are smaller and smaller, as Vannarith‘s husband Chan Nith explains.

Vannarith cuts the fish open and cleans it of the guts, then carefully slices it into two halfs. She then turns the fish filet with the skin on the bottom. Now she carefully shaves the fish meat from the bones and put‘s it in to a plastic bowl. This is quite a time consuming task, since she avoids to break the fishbones. But that’s is on of the most important parts of how to make fish balls in Cambodia.

Breaking up the protein

Once enough fish beat is in the bowl, it get‘s seasoned with salt, pepper and sugar. The latter might sound strange, but Cambodian cuisine is know for being sweet and nearly every dish requires at least a tablespoon of sugar. Traditionally you would use palm sugar, but Vannarith takes refined sugar this time – it‘s cheaper now. 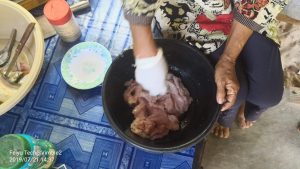 Then her mum takes over. The most important part of making fishballs in Cambodia is to break the protein. When you knead a dough to make bread, you are mainly breaking up the flour to get the gluten out. This is something like a glue, that keeps the dough together later, but also makes it smooth. In meat the same job is done by proteins when they break up. But other than in life, a breakup must be done with force. so Vannarith’s mother smashes the big ball of fish meet on the bowl, kneads it a bit, takes it in her hands and smashes it back again. This process takes about ten minutes, until the texture is smooth and even. Once you know the craft of smahing the dough you really mastered how to make fish balls.

While Vannarith ignites the little gas stove, her mum fills the fishball dough into a plastic bag. She uses the same plastic bag where the vegetables were sold her in at the market. We love it, a great way for a plastic free Cambodia. Some drops of cooking oil will prevent the meat from sticking to the plastic. Then she forms a knot and makes sure, there is some pressure in the bag. She turns the back upside down and hold the tip of the bag in one hand, while she care fully cuts it with a small knife. Now she squeezes the bag a bit and out comes a string she cuts when it is about 2-3 centimeters long. This string is then thrown in the cooking water.

Fermented radish is the secret ingredient to make fish balls 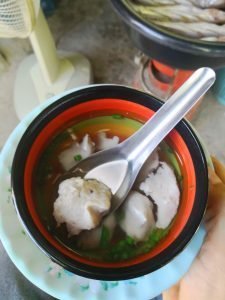 Vannarith minces some garlic, ginger and kaffir lime and ads it to the water. Some salt, pepper and seasoning will make it more tasty, before the special ingredient comes to play. A Siem Reap style fishball soup needs fermented radish. The brownish root is cut into small slices and added to the broth. Once the fishball are raising to the top, they be taken out in a separate bowl. For serving the fishballs are transferred to a small bowl and then she pours the broth over them.

If you want to join Vannarith and like cooking in Cambodia and lean how to make fish balls, book your great food experience at her place.