A guide to: what is fish amok – the famous food in Cambodia

When you travel through Cambodia there is no way you can avoid fish amok. It’s offered in most restaurants, but it’s not an everyday dish in families. We wrote a guide about this typical food – you will learn what is fish amok and how is it made. 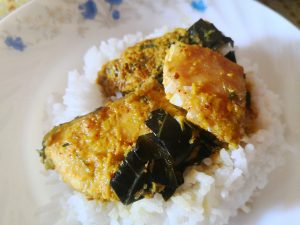 What is Cambodian Fish Amok?

What is Fish Amok? (known as amok trey in Khmer)

Cambodia has so many well known traditional dishes. Amok is one of the national food examples of Cambodia. There are  many local ways of cooking this delicacy. Depending on the region, some traditional amoks are cooked steamed in a banana leaf basket or a simple wrap. Some use only little coconut milk while other put in a whole can. Also the steamers can be different.

Amok is widely distributed in Cambodia. It is a type of curry made from a basic kroeung paste such as lemongrass, ginger finger root, turmeric, kaffir lime, garlic and fish paste.

Following the history of Cambodia, where the capital was in the north without access to the sea, it is made from river fish or catfish. Because of the short distance to Angkor Wat most fishes came from the  Tonle Sap Lake – Asia biggest fresh water lake

Amok was one of the Royal Khmer dishes in the past. It dates back to the Khmer Empire during the 9th to 15th centuries under King Jayavarman II.

During the Khmer Rouge regime, war happened in 1970 and had killed 1.7 million people across Cambodia. After the fall of Khmer Rouge many cultural traditions have been lost. The country wanted to reinstate them, and food played an important role. Then amok was brought back on the table again. Despite, Cambodians do not eat amok very often, they usually enjoy it as a celebration dish for special occasions only.

Fish amok: how to cook it

If you want to learn how to make fish amok, you can follow the recipes below. But a much better choice is to learn it from a local. Our host Ms. Laum makes the propabley best fish amok in Siem Reap. She knows how to extract milk from coconut flesh (because she also makes delicious waffles form it), has her own noni tree right behind the house and cooks amok in a very traditional way she learned from her neighbors in the countryside decades ago.

3. Soak dried red chili until soft and mince them well. Cambodian cuisine is less spicy, so if you are looking for a strong chili kick, just add a bit more.

4. Thinly slice the noni leaves (you can use kaffir lime leaves as well).

5. Once the kroeung paste is prepared, add some minced fish paste (BrorHok), minced chili and pound them together until well mixed, smooth and fine.

6. Coconut milk is one of the essential ingredients of amok. In the previous time people squeezing coconut flesh to get coconut milk. Nowadays, you can just get the ready one in a can.

7. Coconut milk and kroeung paste and noni leave are marinated together. Add some seasoning such as palm sugar and fish sauce depending on your taste. Add the fish in.

8. Once you have made your fish curry mix, you should spoon it into banana leaf basket.

9. Boiling the water in the pot, Steam amok in banana leaf basket for 20-30mins is well cooked, taste and serve immediately.

1. Sprinkle salt and pepper to both sides of the fish fillet.

5. Stir kreung paste bought from the market until golden brown.

6. Add palm sugar, fish sauce, hard vegetables (the type of vegetable that takes longer to cook) and the fish. Cook and stir for 2mins and then add the coconut milk and water if necessary. Slimmer for a few minutes.

7. Half way through the cooking process add the remaining vegetables with noni leaves.

8. Once the amok is cooked, beat the egg in the bowl and add it in the amok.

9. Let it cook for a few more seconds. Add salt to the taste and serve in coconut fruit or banana leaf basket.