5 best ways to get around in Siem Reap

Arriving in Siem Reap is breathtaking: Coming by plane you will see the vast area of the Tonle Sap lake and may get a glimpse of Angkor Wat. Traveling by bus, you will enjoy the countryside. But then comes the challenge how to get around in Siem Reap. The good news is: You have a lot of choices.UPDATE: We added a new e-bkk rental place. See below! 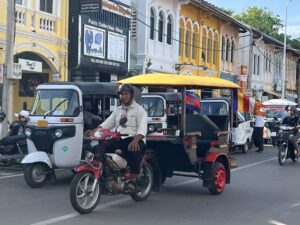 At Dine With The Locals we do not include transport to our hosts, but three families in Siem Reap actually offer the service – the husband is a rickshaw driver and will pick you up. If you don’t rent a car and driver for your stay (what is at least 30 Dollar per day) you need to arrange your transport but yourself.

Since there is not public transport like busses or hop-on-hop-of-services like in Thailand and other countries, you have only private transport option. But that doesn’t mean it is difficult to get around in Siem Reap – it’s actually quite easy, mainly because the city isn’t that big.

The most convenient way to get around in Siem Reap: Tuktuk and Rickshaw

Since 2019 the old tuktuk, a trailer pulled by a motorbike, is replaced by Indian style rickshaws – there-wheelers with a cabin. They are smaller, but offer a more comfortable and faster ride. On a hot day however the cabin warms up a bit – for a longer ride a tuk tuk would be a better option.

How to get a tuktuk or a rickshaw

You habe two options: Just check in fron of your hotel or guesthouse for drivers and negotiate with them. Or download one of the ride-hailing apps. Most popular in Siem Reap are PassApp and Grab, Tada is also gaining market share. The apps are convenient since they offer you a fixed price, the driver is know to them and you can see in a map where you are going (some freelance drivers take a longer way to ask for more money).

If you want a day trip, for example to visit the temples in Angkor Wat, it’s best to hire a rickshaw or a tuk tuk for the day. They cost about $25 to $30 per day, depending where you go. If you book our hosts Ms. Vannarith, Ms. Sokvy or Ms. Chan Mony, their husbands can make you a good offer for a trip and they also speak English, so you don’t need a guide, and they know the way around). 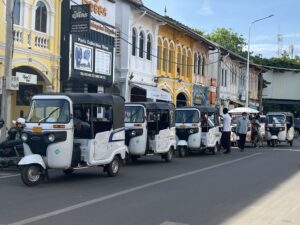 These Indian rickshaws can be ordered with an app

Renting a motobike in Siem Reap

There are shops in Siem Reap renting out motobikes. While many tourists love the idea of driving around the temples or through the ricefields in Cambodia, there are some thing to know. First, technically you need a Cambodian driving license to operate a motobike. An International Driving licence is not recognized. Also, because you would drive illegally, your health insurance may refuse to pay in case of an accident. The police regularly stops tourists in Siem Reap, but mostly for traffic violations like turning when its not allowed or not wearing a helmet (all passengers have to wear one).

Then there is traffic: Cambodia it’s one of the highest death rates form traffic in the world. Rules are not respected like in western countries, and especially on overland roads and at night driving is dangerous. For locals motorbikes are the best way to get around in Siem Reap, but for foreigners it might come with a risk

And last but not least the shops renting out motobikes are not always trustworthy. Usually you have to leave your passport as a deposit, although we recommend to refuse this and leave money instead. Some shops will then complain about damage when you bring it back – this can ruin the day or even the stay here. 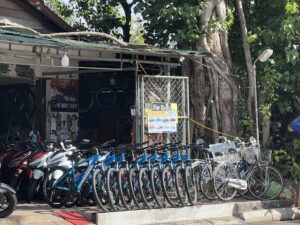 Many shops offer motobikes and bicycles for rent in Siem Reap.

There is a legal solution we recommend: Rent an electric bike. The E-Green shop at Sivutha road in downtown  rents out two models, a smaller one and a scooter like Vorlagen Matrix. The latter is as good as a motobike, the charge is sufficient for a day in Angkor Wat. You don’t need a driving license.. Top speed is up to 50 km/h on the highest setting – but that will drain the battery fast. Go with setting 1 and you are fine. We still recommend to wear a helmet.

Recently a Korean shop opened not far from the National museum on the Charles-De-Gaulles-Road. It’s called Pople and they rent out quite nice looking electric motobikes. They charge $10 for 1/2 day tour and $15 for a full day or $30 for three days. What is impressive beside the building quality of the e-bikes is the charging station. They do battery swaps, so if you are running out of juice you can just switch the battery pack. Also, the electricity for the charging comes from solar panels the installed on the roof top of the building – which also hosts a coffee shop and community space. They even sell Carbon-certificates.

The project is funded by the Korean government. It is definitely worth a try. Get more information at www.facebook.com/CafeandTour or on INstagram @poplestation. 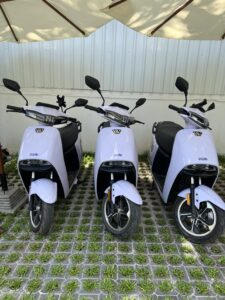 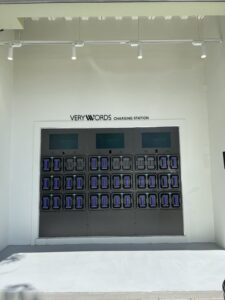 Charging station for the batteries

Renting a bicycle in Siem Reap

The most environmental friendly and cheapest way to get around in Siem Reap is by bicycle. There are many shops in the city where you can rent a push bike. Some hotels and hostels even offer them as a service to guest. We recommend to get a new mountain bike style bike. Old city bikes often have broken brakes and aren’t well maintained. The costs is around $6 per day. We recommend Angkor Cycling Tour in Tapul road for renting bikes – they also offer bicycle tours around Siem Reap.

If you want to explore Angkor Wat by bicycle, be prepared for a longer ride. It’s around 10km from the city to the main temple. The small circuit is 17 km long, the grand circuit is 26 km long, plus 10 km to get back into town. The roads are in a good condition and its flat, and the trees in the Archeological Park are cooling down the air. 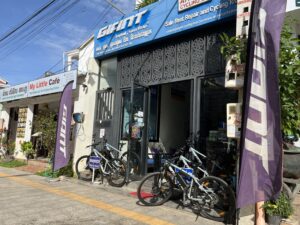 Cheapest way to get around in Siem Reap: Rent a bicycle.

To get around in Siem Reap on a bicycle you can use your phones map for orientation. There are now bicycle lanes in downtown you can and should use. Make sure you lock the bicycle when you take a rest properly – they can get stolen.

All of our hosts in Siem Reap can be reached with a bicycle. We will give you the coordinates and a description, so you can take a ride from your hotel and enjoy the local houses and scenery along the way.