Street food in Siem Reap you should not miss

Everyone is talking about street food in Siem Reap, but only few actually know where to get the best dishes. As food lovers our team went out for dinner to our favorite places in Siem Reap, and some of them are not on the usual bucket list for tourists.

The riverside stalls in Siem Reap 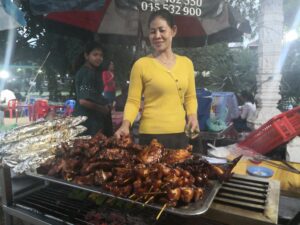 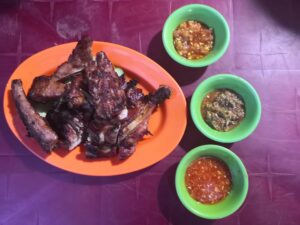 Beside the stalls on road 60 the riverside from Wat Preah Rath all the way down to the roundabout opposite the cinema provides a large selection of street food. You get grilled chicken and pork, squid and other seafood as well as classics like fried rice and fish amok. The stalls south of the police post at the bridge are usually more touristy, while locals eat at the stalls north of the old market. One of our favorites is nearly at the end of the line and run bu a couple, who worked here for four years. This stall has probably the best pork rips and chicken legs, but serves also a rare delicacy: steamed cow brain with mushrooms. The soup is quite famous in Cambodia, but only few stalls actually serve it.

Opposite the Angkor Wat ticket counter is another street food in Siem Reap paradise, although not the best place for vegetarians. In the early afternoon this part of road 60 starts to fill with vendors pushing their carts and unfolding tables and stands. Within an hour the first grills are up and running. at some places you van buy take away, others have some plastic chairs and tables when you can sit and enjoy grilled chicken, fish, meatballs and of course lots of fried insects. The area is popular with locals, and most vendors don’t speak English. Best is to just point on something and ask how much (“Bon man”) They will usually tell you the price in dollar. 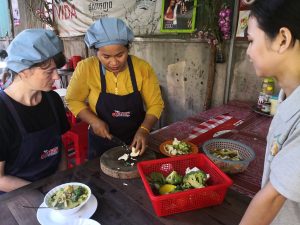 One of our most booked food experiences was making street food in the morning at the restaurant of Ms. Hong Ginlai. She moved her stall in 2020 from the behind the provincial hospital to the street where the high school is located. And she got so busy, that unfortunately she can’t cook with tourists anymore. However, you can still watch her making lots dishes and of corse try them.

Every day she prepares up to 15 dishes, from sour soup to Koh Kor, fried fish cakes and her signature dish, prahok ktis. She is open from 8 am until everything is sold out, usually around 5pm. While she doesn’t speak English, ordering dishes is simpel: just point on the dish you want to eat. One of the most authentic street food in Siem Reap experiences. 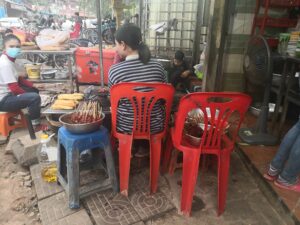 All sandwiches are freshly made 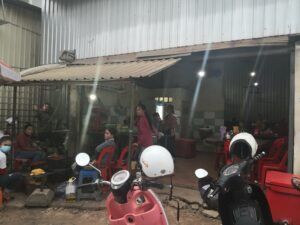 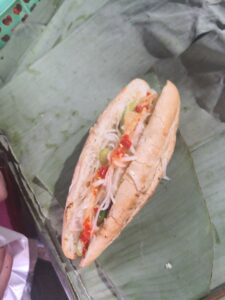 One sandwich comes with grilled beef 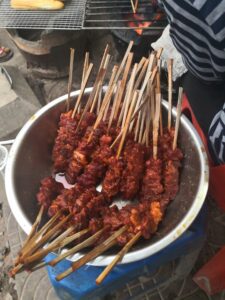 The marinade recipe was developed by the grandmother

If you haven been to Vietnam, you most likely had a banh mi, the sandwich with pate and beef or chicken and some pickeled vegetables. Cambodia has its own version called Num Pang pate, but there is also a sandwich with grilled beef which is then Num Pang Saik Ko Ang. One place near wat Damnak is famous for it grilled beef sandwiches, it on the corner where Rabutan Lane starts and where the Khmer Grill was once. This small restaurant sells the sandwiches since 30 years. What makes it so special is the marinade. Its the old recipe developed by the grandmother. The stall opens late afternoon, around 5pm and you cannot miss it, just stop where all the motobikes are parked. 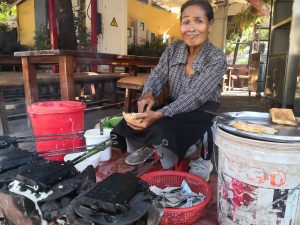 Another of our hosts, Ms. Laum, is also a street food seller, but for the sweet tooth. She makes some of the best Khmer waffles, Num Pom, in Siem Reap. She uses not only coconut milk, but als fresh grated coconut flesh, and prepares the batter every morning in her home, You can find her on Sivutha road, where the pub street starts, from 8am until she sold out. In case she isn’t there, another alternative is the stall under the big tree opposite Amazon cafe on the river side.