title, keyword
Home » Red Zones and a glimpse of hope in Siem Reap

Red Zones and a glimpse of hope in Siem Reap

Siem Reap had been largely spared from Covid-19 for a long time. While in Phnom Penh the city was paralyzed, people here could still go shopping and eat in restaurants. 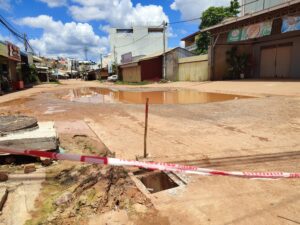 The back entrance to the Psa Leuy in Siem Reap market is cordoned off.

But that has changed since August. Even though many people in Siem Reap are now vaccinated (in the city area, it is said to be over 90 percent), the number of Covid-19 cases increased. There were many reasons for this: The aggressive Delta variant has also arrived in Cambodia. Many Cambodians who worked in Thailand are returning home. Although most of them were intercepted and tested at the border, some managed to make their way back to their home village along winding paths. There, vaccination rates are still low. Unfortunately, it is the many vegetable farmers who then go to Siem Reap to the market and have infected traders there.

The official infection figures and other data are no longer published by the provincial administration. Most recently, there were 100 infections per day, now the figure is said to be significantly higher. It is also unclear whether people who have already been vaccinated have been infected – and are counted despite a mild course or even without symptoms. There are no figures on a hospitalization rate. 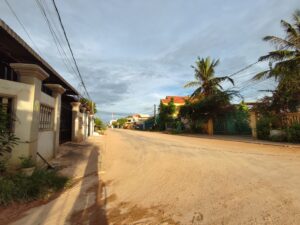 The increase in infections has led to the closure of parts of Siem Reap since mid-September. Initially, the city center was a yellow zone from which no one was allowed out. There is still a ban on the sale of alcohol and a curfew between 9pm and 3am. Since this probably did not bring the hoped-for result, the administration declared parts of the city center and individual neighborhoods and villages to be red zones. In these, people are actually not allowed to leave the house. Initially, this led to supply bottlenecks. The important festival of Pchum Benh is cancelled countrywide since people got infected in pagodas in the capital.

People in Siem Reap can still order food and groceries

In the meantime, however, delivery services are allowed to bring food, and the administration has also set up a course and delivery of food – albeit at significantly higher prices. The city’s largest supermarket has set up an ordering service via Telegram. The Red Zone was initially supposed to last one week, but has already been extended by one week. There is currently no traffic between Siem Reap and Phnom Penh or other cities, with a few exceptions such as ambulance transports or food shipments. The latter are not without problems because their drivers are not all tested. Many people in Siem Reap wonder why they dutifully went to all vaccinations (some have even received a third vaccination) and are now “punished” with a new lockdown. 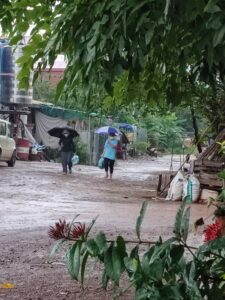 But there is also good news. The central government in Phnom Penh is working on plans to reopen the country. This may take some time given the current situation, but it is a glimmer of hope. Travel agencies, airport operators and airlines are all ready to handle the influx of foreign visitors safely and efficiently. All they need is a reopening date from the Cambodian government. Industry officials welcomed Prime Minister Hun Sen’s comments last Friday that Cambodia should consider a seven-day quarantine for fully vaccinated tourists. The prime minister expressed the view that tourism trends will be different than before. Safety and comfort will be prioritized when deciding on destinations.
In this regard, the Prime Minister encouraged and supported the launch of the “Cambodia Safe” campaign as a strategic aspect to attract domestic and international tourists in the reopening phase and in the future.

Tour operators have reported that interest in Cambodia continues unabated. Many customers are just waiting for there to be clear rules. Quarantine, even for seven days, is rejected by many travelers. In contrast, vaccination cards, distance rules and also the wearing of masks are advocated.