The situation in Siem Reap has not improved in the past months; it is even getting worse for some people. Even if the construction work on the 38 roads that are being renewed is progressing, this has hardly any influence on the living situation of the people. Only a few have been able to get a job with the construction companies, and some then have to fight for their wages.

One positive development is the rapid vaccination coverage in Siem Reap. The second wave of vaccination has already started, and by now, most adults in the city and province have been vaccinated twice – with Sinopharm or Sinovac. The government in Phnom Penh has held out the prospect of a booster vaccination after some time, probably with AstraZeneca. These boosters are already being given to aid workers in the border regions, where too many migrants are still coming back into the country from Thailand – many infected. 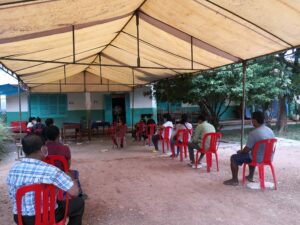 People waiting for their vaccination in Siem Reap.

The economic situation in Siem Reap continues to be disastrous. The many lockdowns have barely allowed the few restaurants to survive. Hotels have closed or are for sale. Only a handful of what used to be over 1000 hotels and guesthouses are still open, staffed mainly by two or three people with only a few rooms available. 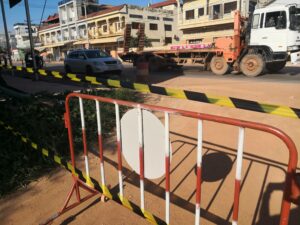 A street is blocked by tape and barriers. Siem Reap is currently a orange zone.

Of course, Siem Reap was and is dependent on tourism, and that will not change. The Corona pandemic did not bring structural change. It is just easier to demand something than to settle other industries here. Only the construction industry is booming – the money of the rich is invested in concrete and land. Those who can look for a job in Phnom Penh. But there, it is also more difficult, and the cost of living is higher than in Siem Reap. Many can stay with family members. Others have to share tiny rooms with work colleagues.

Even if some in the tourism industry spread purpose optimism, it will take at least another year before there are tender new seedlings in the travel industry. The fear of bringing a new variant into the country is too great. In addition, it is still unclear worldwide who is allowed to travel wherewith which vaccinations. The only thing that seems clear is that the unvaccinated have to stay at home.

The people here in Siem Reap endure everything as they do with composure and patience, sometimes with stoic calm. They wait until it is over – which could be a fatal mistake. Because at some point, skilled workers will be needed again, and then those who have developed further, who have learned something new, for example, Chinese or another language, will be taken. Tuktuk drivers have already experienced a major slump due to Grab and Passapp, but they could at least still switch to the new Indian rickshaws. Guides are a dying profession; they probably won’t have the high incomes they used to build their homes. Though you never really know in Cambodia, the hotel market could consolidate – if the rich elite continues to build prestige hotels that don’t need to make money, it will be difficult for international investors to provide quality. 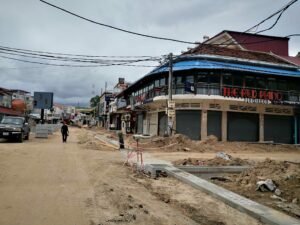 The roadworks around pub street.

Dine With The Locals had its last booking in April 2020. As of a few weeks ago, the company behind it, Tabalr Technologies, has been dissolved. The cost of it was simply too high without income. The project can and should live on, but we don’t know in what form yet. We are always open to suggestions and support. By the way, we have been able to keep in contact with some of our hosts, and at least from private funds, we have been able to help two families from time to time.