The best hidden food secrets of Cambodia in 2022

Angkor Wat and its surrounding temples have been the center of an vast empire for hundreds of years. We do know who ruled the Khmer Kingdom, but we know little about the daily life of average people. For example the food secrets of Cambodia. The only clues we can get are from the carvings at the temples. And there, we learn about the history of Cambodian food and the way it was prepared.

When visiting the Angkor Wat archeological park you will see food and farming on each wall of the temples are different designs, carvings and descriptions. In this article we will show you some carvings that are a part of the Bayon temple and describe the lives of people in the past. 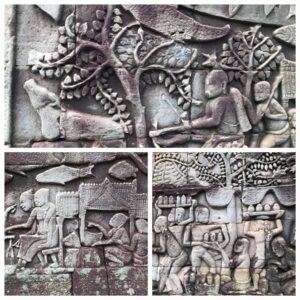 Based on those carvings, we know that in the past Khmer people were occupied with hunting and fishing for a living. They also sold or exchanged goods for each other. But the carvings reveal some of the food secrets of Cambodia.

Even in ancient times Cambodians used a cooking place that resembles the outdoor kitchens of today. A carving at the Bayon temple shows a group of people in the kitchen. Some are cooking rice (not really a food secrets of Cambodia), some are preparing ingredients for cooking and some are light up the fire. This carving not only shows us about people who are cooking but also shows us about what kind of materials people used. All of the tools such as stoves, pots and pans in ancient Khmer kitchens may have been made of clay or brass, depending on the era.

In addition to carvings showing us cooking, we also have a carving that shows about eating . Now  Let’s take a look at the next carving below. One of the less know food secrets of Cambodia is, that at the time of Jayavarman II. most Khmer dishes were developed. But one ingredient wasn’t available yet: chili. It came later from South-America, and that is one reason why Thai food developed later – is spicy, but Khmer food usually isn’t. We haven’t found any signs of chili plants in the carvings. 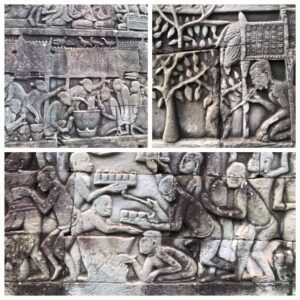 This carving  shows the activities of people eating. It looks like a group of people, eating together at a party or family meal in different places. still today Cambodians often sit together in a circle on a bed or mat and use their hands for eating. But  If we take a look at the carving on the right of the top in this part , we can see that a person is sitting on the short chair while other people are kneeling on the ground. So it might be that the higher ranking people sit seperated from the normal people.

This and what we know about the luxurious lifestyle of royals as well from trading with India and China suggests, that Khmer food had a lot of varieties. we don’t know if the fish paste prahok was developed yet, but it is likely. The kings cooks had everything regarding spices and meats at their disposal, and the surely used it.

These are just some of the carvings mentioned above. There are many other carvings that show stories about the living of the people. When you visit the Bayon Temple, take the time to explore those carvings. There are so many stories told.

If you want to learn more about the secrets of Cambodian food and the daily life of Khmer, Dine with the locals will give you experiences of cooking , eating and more activities with locals.